In remembrance of Thomas the Cat, who departed for the Rainbow Bridge on February 9 2015 at 15 years of age. He had the honor of being and Animal House Clinic Cat.

We got him when we rescued a group of kittens from Animal Control. Of course, he was no kitten, and hadn’t even been a spring chicken for many years either. The story was that he was a leftover when and elderly gentleman had passed away. Due to age, he was now on the chopping block to be euthanized. Instead, he got a pardon and came to Animal House.

He started out nervous and uncertain of his place. The scruffy orange cat was healthy though – as healthy as a 25 year old cat with bad arthritis could be. He began to settle in, little by little, sharing his personality an inch at a time. According to his paperwork, his name was Thomas. Little did we know how much he’d make the name his own.

He proved to be both patient and tolerant with the kittens that were saved with him. They would dance up to him or spring at him from corners. He never growled or hissed, never once arched his back or fluffed up his tail. Instead he’d roll his eyes and gently cuff them on the rump or tail-tip as they darted away. One by one, each kitten found a home. But Thomas settled in to stay.

He had an attachment to three things: a fluffy tan rug, his spiffy green, double-padded bed and anyone with thumbs that could open Fancy Feast cans or Temptations treat bags. His deep, gravely “Now!” could be heard often, trying to con someone into opening food for him. But at other times, he was observant and dignified, like an elderly Southern gentleman. Perhaps a better comparison is to an old cowboy – he did walk like one because of his arthritis. And he reminded me strongly of Clint Eastwood in every one of his westerns I’d ever watched.

Thomas’s last day was bleary, wet and grey. He’d been losing weight and his health was declining. He was no longer as vibrant as he had been a year ago. He went quietly and proudly, able to be snuggled and held beforehand in a way that his arthritis hadn’t previously allowed. I decided to take him home, to be buried beside other pets of his gracious mold, in a spot with a prime view of the bird feeder. In case souls come back occasionally to visit their resting place, he’d want to see those birds. As my husband and I placed him in his tiny grave, the clouds faded a bit and revealed the most vibrant rainbow, framed by bright orange clouds as the sun set. I think Thomas approved. He’d found his happy ending, and like all the best cowboys, had sauntered off into the most brilliant sunset imaginable.

In Memory of Riley Weatherly, Irish Setter who departed for the Rainbow Bridge 23 August, 2013 at the age of 10 years.

Have you ever heard the saying “you don’t choose your dog, they choose you”? In Riley’s case I think God chose us for each other. I think God knew that because of my love for nature and animals, I would take care of him. But what I didn’t know was that God had joined Riley and I together on a journey that I will hold in my heart forever! I have had pets before, but Riley was much more than that, he was one of a kind.

Riley got sick when he was about 6 months old, with his stomach, then again 6 months alter with his ears. That is when I met Dr. Shower. She took care of Riley. She was different. She possessed the same caring, compassion and love for animals that I did, and it showed. Then Riley was diagnosed with diabetes. That was an illness that not only wasn’t going away, but had complications attached to it. I couldn’t do this alone, but I never had to. No matter where she was, Dr. Shower was there for Riley and me. Riley knew it too. No matter how long it had been or how bad he felt, he immediately calmed down when he heard Dr. Shower’s voice. Not only did we have a great vet, we also had a friend. I will always be grateful for that.

Riley had his share of struggles, but as we conquered each one, I think we always walked away with a lot of new friends. I guess birds of a feather do flock together.

I’ve had my share of struggles in the past few years, but a warm lick, perfectly timed, always seemed to make thing better. No matter how much Riley needed, he always gave so very much more to those around him. He took everything in stride and always came out on top. He was just happy all the time, even after he lost his sight (complication of diabetes). Everyone loved him. Riley brought out the best in everyone around him. My husband and I had to work together and sometimes make concessions because of Riley’s illnesses but it brought us closer together.

On August 23rd, when Riley was almost 11 years old, his earthly journey came to an end.

When Riley died, I was so hurt and angry. I asked, “Why God, I don’t understand?” Almost immediately in a low, soft comforting voice, he answered, “You know why my child”, and I did.

God had given me what I needed & my lesson was done. My journey with one of God’s flock taught me so much about humility and humanity. I hope I can always be the person Riley helped me to be.

I’ll miss you Riley… Til we meet again. 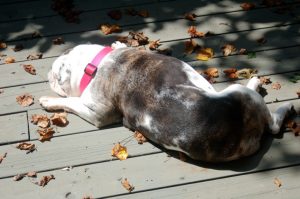 Sophie Rhodes, English Bulldog Extraordinaire! Departed for the Rainbow Bridge 7 Jan 2013, at the age of 12 years. A Tribute to Sophie is below:

Leave a Few Crumbs in My Pockets by Donna Rhodes

I still hear Sophie in the house even though she has been buried for nearly a week. I hear her snores during the night, the click of her toenails as she patters to the door to greet me, her “hooverings” as she snuffles up crumbs in the kitchen, the familiar clinking of her dog tags as they brush against the buckle on her collar.

Sophie made it to nearly ninety in people years. Though arthritis and allergies sapped some of her English Bulldog strength and spirit, she did her best to please, to cheer, and to devote herself to her human as only a loyal dog can do. The day she died, in the middle of a sea of sorrow, I surfaced long enough to imagine a conversation with her, my Sopher-gurl, which went something like this: “Sophie, how would you like for us to celebrate your sweet life?”

She said, “Momma D, what do I like best in the whole world?”

She said, “So get a cake, friends who knew me, and woof it down!”

That is exactly what I did.

At the grocery store I ordered a colorful cake and had Sophie’s name inscribed. I found some paper plates featuring a playful dog with the caption, “Do I smell cake?” Perfect! Sophie led me to the plates. No one could convince me otherwise.

At our Sophie ceremony I arranged the cake and plates next to a little drawing of Sophie who was adorned with a golden crown. My friends and Sophie’s former mistresses, Rita and Michele, finished the setting with a big bouquet of flowers.

Outside Rita’s backdoor, at the bulldog and kitty graveyard Mike, Rita’s husband, dug Sophie’s final resting place. We tucked her into, appropriately enough, a Wag (dog supply) box. As we covered her coffin, we tossed in sweetheart messages, reading each one aloud. Sweethearts are the little heart-shaped candies embossed with sayings like, LOVE U and O.U.Q.T. The very last sweetheart to be thrown was serendipitous. It read: PUPPY LOVE. All the sobs we so doggedly suppressed gushed at those words.

We hugged. We said prayers to the Almighty and to any doggie deities and canine saints who might be listening. After the ceremony, we went to Caffe Rel and toasted Sophie: “To the world’s sweetest pup!” Then we ate FOOD, lots and lots of slurpy, greasy, plate-lickin’ chow in her honor.

The final tribute was cake, delicious and glorious, as Sophie’s life had been.

LOVE U, Sopher Doodle. I’ll see you in the next life. When that day comes, I’ll remind my kin to leave a few crumbs in my pockets just for you, my dear ol’ pal.

Shadow Sigler, Mixed Breed Departed for the Rainbow Bridge 10 September 2012, at the age of 12 years. A Tribute to Shadow is below: 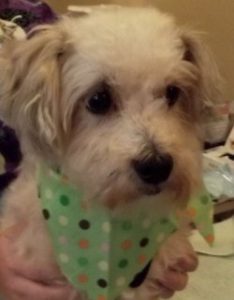 Shadow, an Epitome of Canine Virtue by: Barbara Sigler

Shadow was the epitome of virtue for adopting unwanted, abandoned or abused animals. This perfect little dog came to us through the efforts of ARNIE and our daughter. He was about one year old when his owner, for whatever reason, took him far into the woods near Raleigh and left him there. He was discovered about two weeks later wandering along a busy highway, picked up and taken to a local vet. He was covered in fleas and other parasites, plus much matted fur. Through the great care he received, he was nursed back to health and provided with a caring, temporary home until he could be adopted. Thus a new door was opened for us and a new chapter began in hour home and lives — one that has contained many pets through the years. Slowly, Shadow began to emerge as a super-loving, attentive, grateful and faithful friend. One that would do anything to please and show his love for us. He was always there to greet us when we came home with unlimited affection and then stake out my lap as soon as I sat down – matter where I was sitting. And I really mean that!!

We had our wonderful Shadow for more than 12 years and not once did he disappoint us except on the day that he let us know it was time for him to move on to an even better place and wait for us there. It was a crushing blow to lose this super dog that someone had thought was not worthy of keeping. To us he was greater than words could ever describe and there are still wet spots on my pillow at night – more than three months later. I believe that if God put man on Earth to try and live by His word, then He put dogs here to show us how.

We will forever miss this wonderful part of our lives but we know through faith we will see, hug and play with Shadow again.

Shadow’s passing has left us with a void that we thought could never be filled, and it can’t, but we can and did open another door in our hearts to give love to another unwanted pet, or two, as it happens. In December, my husband asked me what I wanted for Christmas, a leading question to say the least. The only thing I didn’t have that I really wanted was more fur to clean up, more things to put back where they belonged, more walks to take, and moset of all, more love to give and receive. We now are the parents to a gorgeous kitten named Scooter and a very elegant dog named Christa, both unwanted at their former homes.
Life is slowly coming back to normal for us.

And that is good.

Accessibility by WAH
Call Us Text Us